This post was written for Jet.com’s technical blog and is pending publication.

I recently wrote a proposal on microservice edge testing to state a blind spot in current testing practices and propose a solution. There has also been some further exploration of the subject. In the proposal, I dug deep into the problem and attempted to keep things agnostic to any specific implementation or architecture. In this post, I’ll focus more on the approach we’re experimenting with at Jet.com.

There are some pretty common practices for testing microservices. These practices are largely used in non-microservice architectures, but microservices introduce some new complexities that push testing needs a little further.

The problem in this is that non-vanilla interactions between microservices are not being adequately tested.

Why Is This Happening?

The main reason this happens is because there is no natural home for these tests in the current approach:

There’s a definite gap in our testing, and it happens to be in a very dangerous place. This is mitigated in different ways in different environments. In each environment, there is either a decent amount of risk in Production or the process of getting code into Production is painful. I’d argue that many environments suffer both of these fates.

Since the fake of the provider microservice will be used in unit testing, it must meet the following criteria:

To make sure that the fake stays up to date, the provider microservice needs unit tests to validate it. Basically, we want to test the provider’s real behavior and compare it to the fake’s behavior. By making it a core part of the provider’s code lifecycle, it’s going to stay in great shape. 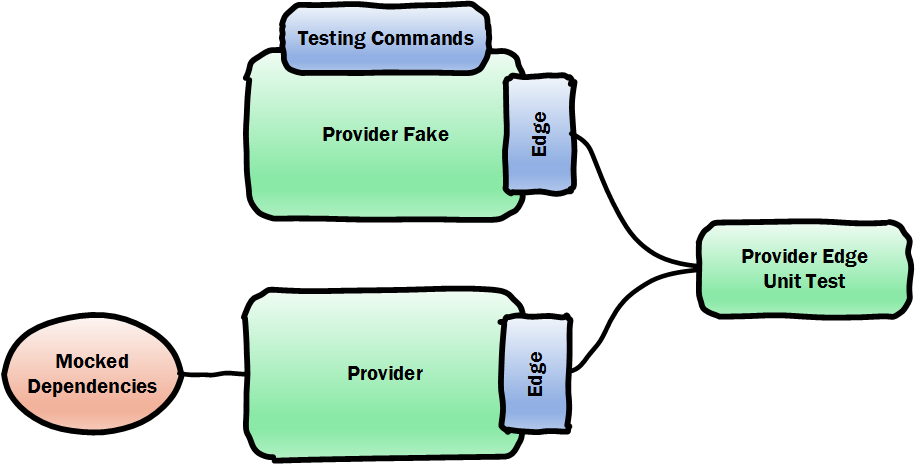 In addition to the standard interactions with the provider’s edge, the fake will have additional features that are unique to testing scenarios. Here are a few examples:

Well, at Jet, we’re going to take a stab at building this out and see how it works in practice. Stay tuned!